Posted at 14:06h in Uncategorized by The Watch House 0 Comments
0 Likes

This is my take on the traditional Thanksgiving dessert. Every November my American wife cooks a pumpkin pie for us using the ready-made Graham cracker pie/tart cases, Libby’s tinned pumpkin puree that’s sold in American shops and good delis in London and my least favourite pudding ingredient evaporated milk. And every year I remember why it hasn’t made it over to these shores like so many other American desserts…

So I thought if I have to eat it, I’d at least try and make it more palatable for the non-pumpkin eating British public as well as making it look a bit more exciting for those who might want something a bit different. I’ve replaced the tart case with a spiced shortbread, whipped up the pumpkin with some double cream and substituted the cloying sugariness that comes from evaporated milk for a nicer sweet note from maple syrup and then added a little Greek yoghurt to balance out the sweetness of the pumpkin. Using a cinnamon ice cream, some fun toppings of caramelized pumpkin seeds, butternut squash crisps and a surprising but delicious addition of pumpkin seed oil as a syrup to finish the whole thing off in true Knickerbocker style.

2 tsp of pumpkin pie spice-or make your own with ground cinnamon, cloves, nutmeg and ginger

Preheat the oven 180’c. Sift the flour, salt and 1 tsp of pumpkin pie spice into a mixing bowl and add the caster sugar.

Using a sharp knife, carefully slit the vanilla pod open lengthways and run the back of the knife to extract the vanilla seeds, add this or if using natural extract to the bowl with the butter. Now using your finger tips, rub the butter and vanilla into the dry ingredients to resemble bread crumbs and then bring it together to make dough.

Bake for 25 minutes, making sure to turn the tray to evenly cook all the biscuits.

Mix the granulated sugar with the remaining pumpkin pie spice.

Remove the tray once they are nicely golden brown and dust with the spiced sugar. Leave to cool. 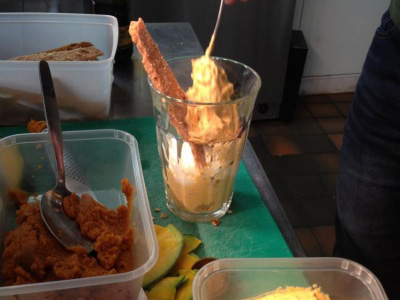 Lightly whip together the pumpkin puree, maple syrup and double cream until soft

A few balls of Cinnamon ice cream-I use Moomaid of Zennor for my ice cream as it really is as good as home-made. If you are not able to get cinnamon ice cream, vanilla should do fine.

You can make this as simple or as complicated as you are feeling on the day. A simple option is to place a few scoops of ice cream in a nice glass, add a layer of the Pumpkin Chantilly and then one more scoop of Ice Cream on top. Add the pumpkin seeds and Pumpkin seed oil and stick in a few pieces of the sliced short bread.